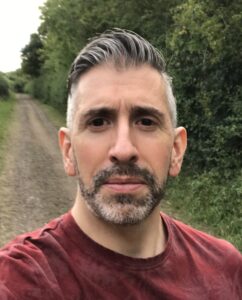 Discovered, aged 18, working alongside legendary vocal coach, Mary Hammond, as a repetiteur for Sir Cameron Mackintosh’s original production of Miss Saigon, at the Theatre Royal, Drury Lane, London, Simon was invited to be a part of the original production of Andrew Lloyd Webber’s Sunset Boulevard, both at the Adelphi Theatre, London, and it’s European premier in Germany. He made his conducting début in this production, aged 20, as the youngest assistant conductor in musical theatre.

Simon went on to work in the original productions of Disney’s Beauty and the Beast, The Best of Times with Jerry Herman, Chicago, Charles Aznavour’s Lautrec, Les Miserables, Martin Guerre, On Your Toes starring Adam Cooper, The Phantom of the Opera, Hal Prince’s revival of Showboat, and The Woman In White.

He was Len Cariou’s vocal coach when Mr Cariou recreated his original title role for the concert performance of Sweeney Todd at the Royal Festival Hall as part of Stephen Sondheim’s 70th birthday celebrations. Simon also worked with the revival casts of the Donmar Warehouse productions of Merrily We Roll Along and Company for the Sondheim at 80 series, directed by Rob Ashford & Jamie Lloyd, respectively. For Sondheim’s 85th birthday celebrations, Simon performed in the orchestra (at the piano) at Theatre Royal, Drury Lane, London. He was also featured as a soloist, accompanying Millicent Martin.

In summer 2014, he played solo/featured piano in front of 20,000 people a night at the O2, London in Monty Python Live! (Almost). The last night was also broadcast live, around the world, on television and in cinemas. Simon is also featured on the DVD.

Other television appearances include Gloria Hunniford’s Open House (CH5) and The Paul O’Grady Show (ITV). Simon was an audition panelist for Jane McDonald’s Star For A Night (BBC1).

Simon is also an accomplished singer, and has performed with his musicians at many venues throughout the UK, and around the world. His début solo album, The Courage of a Dreamer, was released in October 2015.

In demand as an educator, Simon has led masterclasses and one-to-one sessions at the following top conservatoires in the UK:-